I cook for a carnivore, which means I’m constantly looking for food that will be satisfying for my fiance. This is especially hard since he’s not a fan of most veggies. This dinner was well received, while not totally accepted since he can detect preparation differences. In this case, he could tell I didn’t use “milk” but didn’t know what I used per se. This is a man who is content with hot dogs, with some cheese and bbq sauce as a staple. He would eat this again, but I think I will up the herb factor even more next time. Here is what you’ll need.

Brussel Sprouts (frozen if you need a fast option)

If you’re using fresh brussel sprouts, cut them in half, cover with olive oil and season to taste. Use some foil to get them to steam up and not dry out in the first half of cooking time. Pop in the oven for about 15-minutes at 400. Uncover and let them cook another 10-15.

If you’re using frozen in the bag… pop those in microwave according to directions.

Boil potatoes and cut up onion and mushrooms. Place them in a pan with olive oil and season with salt, pepper. Remove from heat before done.

Smash potatoes in a bowl adding unsweetened coconut milk and butter alternative to taste or desired consistancy. I like mine less smooth or refined. Add salt, pepper and onion powder to taste.

Place brussel sprouts in a pan with oil, salt pepper, onion powder and get them toasty. (or remove your raw ones from the oven.

Add heat to your onions and mushrooms while placing potatoes in a bowl. You can plate this deconstructed as I did, your layer. Your call. Add your sprouts and veggies. Top potatoes with cheese alternative, parsley, and fried onions.

Congrats! Time to eat. Here is the image play by play 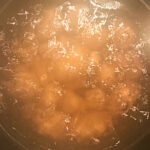 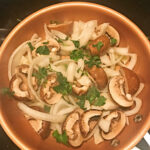 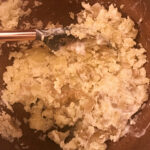 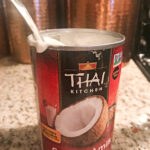 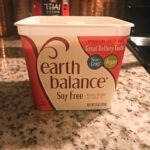 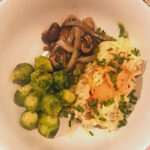